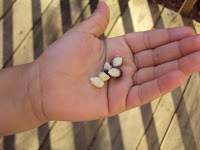 When we started our ministry over twelve years ago, we started a tradition that we observe each November. It is an opportunity for us to spend the entire month thanking God for all of the blessings we have received and continue to receive.

Our tradition is not original. It is based on a simple story from the early days of our great nation. According to the story, the Pilgrims faced a very harsh winter. Their crops failed and they had very little to eat. Disease and hunger both took their toll on those early settlers. If it weren’t for their faith, they would have given up, dug graves and just buried themselves. But, they didn’t give up.

The pilgrims took what they had and began to ration their food. Their daily ration was five kernels of corn a day. These were certainly dire times for them. Their bodies were not just sustained by only five small kernels but their spirits were also sustained by the word of God.

In chapter eight of the Book of Deuteronomy, we read, “Yes, he humbled you by letting you go hungry and then feeding you with manna, a food previously unknown to you and your ancestors. He did it to teach you that people do not live by bread alone; rather, we live by every word that comes from the mouth of the Lord.”

These were the same words that Jesus used when tempted by Satan while he was hungry in the desert. Satan told Jesus to turn the stones into loaves of bread to ease his hunger. But, instead of doing what Satan tempted him to do, Jesus quoted the scripture to him.

Although the story of the five kernels is more of a myth, it still reminds us of the hard times and what it takes to overcome them. Like Jesus, the Pilgrims remembered those wonderful words. We, as Christians, do not live by bread alone. The word of God feeds us daily. The word sustains us when we face even the worst of times and strengthens us during the best of times.

After surviving the harsh winter, God opened the windows of heaven and an outpouring of blessings showered the settlers. God provided them with new friends, the American Indians, who helped them with raising crops, hunting and fishing. They were blessed beyond their needs and all thanks were given to God and His bountiful hand.

As the settlers enjoyed their bumper crop and all of the wonderful foods shown to them by their new friends, they set a table and invited their new friends to the feast. Before they ate in fellowship, the Pilgrims did two very important things. The first was to give thanks for all of the blessings they received from God. The second was to place five kernels of corn on each plate to remind themselves of their struggle and of their faith in God.

Over time, the legend of the five kernels grew. Each kernel was given a specific blessing for each person to remember and give thanks for.

In keeping with the tradition, I will begin the first of a five part series. Each message will be devoted to one kernel of corn and its message to each of us. During this year, we faced many adversities. Because of God’s blessings, we are able to come to a table set before us and give thanks. So, as I share the blessing of each kernel, I ask that you remember it and the lesson it teaches us not only during Thanksgiving but also each and every day.

The first kernel reminds of God’s love for us. Although we are unworthy of His love, God still loved us enough to give us His one and only son, Jesus, as our atonement sacrifice. Because of that undeserved love, God has provided us with a wonderful plan of salvation. By admitting that we are sinners and accepting Jesus as our personal Savior and Lord of our lives, God welcomes us into that eternal family. We are His children and when we pass from this world we will receive the deed, paid in full, to a mansion in heaven.

Paul, in chapter three of his letter to the church in Rome, writes, “For everyone has sinned; we all fall short of God’s glorious standard. Yet God, in his grace, freely makes us right in his sight. He did this through Christ Jesus when he freed us from the penalty for our sins. For God presented Jesus as the sacrifice for sin. People are made right with God when they believe that Jesus sacrificed his life, shedding his blood. This sacrifice shows that God was being fair when he held back and did not punish those who sinned in times past, for he was looking ahead and including them in what he would do in this present time. God did this to demonstrate his righteousness, for he himself is fair and just, and he makes sinners right in his sight when they believe in Jesus.”

There is no way for us to make ourselves righteous in the eyes of the Father. It is only through our acceptance of God’s grace and mercy that we are made righteous in his sight. We must believe just like the Pilgrims during the early days of our nation. Their faith kept them alive and on the path of righteousness.

I am sure that some found their faith pushed to the limit. Some wondered whether or not God was even listening to their prayers. Those questions sometimes pop up when we face the harshest of circumstances. But, there are those around us who are able to help in our daily walk with the Lord. We not only lean on the everlasting arm of the Lord but we also help one another by encouraging each other. Those who provided encouragement and strength to the others reminded them of the words of the Lord.

The prophet, Jeremiah, in chapter twenty-nine of his book, writes, “‘For I know the plans I have for you,’ says the Lord. ‘They are plans for good and not for disaster, to give you a future and a hope. In those days when you pray, I will listen. If you look for me wholeheartedly, you will find me. I will be found by you,’ says the Lord. ‘I will end your captivity and restore your fortunes. I will gather you out of the nations where I sent you and will bring you home again to your own land.’”

As Christians and as a nation, we need to humble ourselves before the Lord and seek him. When we do, God will restore us and give us what we need to overcome even the harshest of adversity. He is truly Jehovah Shammah, The Lord is there. Because of His love for us, God is always there and gives us the strength and the ability to stand firm in His grace.

Psalm 12:7-8 Holman Christian Standard Bible You, Lord, will guard us; You will protect us from this generation forever. The wicked wander e...