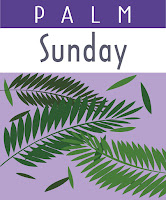 When we celebrate Palm Sunday, we sometimes only concentrate on the day and what was done that day. We, as Christians, know the story that Jesus comes into Jerusalem on a donkey and that people turn out to greet the prophet and teacher from Nazareth in Galilee. The people are so excited to see him enter the city. To honor him, they “took branches of palm trees and went out to meet him, crying out, ‘Hosanna! Blessed is he who comes in the name of the Lord, even the King of Israel!’” Others spread their garments on the road before him. The people could not contain their excitement to see Jesus.

But, in a very short period of time, things would change. The excitement will soon turn to anger and instead of wanting to see him, they will soon shun him. It is so very interesting how an excited group of people can easily be turned into a raging mob out for people in just a short period of time.

Unfortunately, all of that excitement drew the eyes of those who felt that he would upset the status quo. It was fine for him to preach his message in the wilderness and the backwater communities outside of Jerusalem. To most who were in power, he was just some sort of annoyance that caused a stir, but was something that could be tolerated. But, now, he came into the big city and was more than just a little annoyance. Some felt threatened by him while others wanted to see him disappear.

When you examine the prophecies, you begin to realize that this was only the beginning of something really big. This sort of big is more than the human mind could possibly comprehend. A few knew exactly why he was here. All you have to do is understand the scriptures and the prophecies.

When Jesus came into the city on the back of a donkey, he fulfilled the prophecy given to us in the Book of Zechariah. In chapter nine, he wrote that the king would come humbly “riding on a donkey—riding on a donkey’s colt”.

No king comes into a city humbly. There is always great pomp and circumstance that occurs. Think about how countries greet dignitaries from other nations today. There are bands, speeches and more bands and speeches. Flags are flown while the hosting nation displays its military might. In the past, the conquering hero would ride into a city on the back of a white stallion. The hero’s chest would be covered with medals or he would be wearing a shiny breastplate. His army would be following him into the city. It would be a great show of strength and power for all to see.

In the case of Jesus, he came into Jerusalem on the back of a young donkey that was literally borrowed. He didn’t lead columns of soldiers or have banners flying overhead. No. He came into the city humbly. His followers shouted out and showed their love and excitement. It was truly a parade to behold and experience.

As he continued to make his way into the city, some of the Pharisees weren’t too happy about all of this commotion and hoopla. In fact, they told Jesus to tell his followers to be quiet.

In chapter nineteen of his Gospel, Luke writes, “But some of the Pharisees among the crowd said, ‘Teacher, rebuke your followers for saying things like that!’ He replied, ‘If they kept quiet, the stones along the road would burst into cheers!’”

The crowd was shouting and singing, “Blessings on the King who comes in the name of the Lord! Peace in heaven, and glory in highest heaven!”

You can only imagine how the Pharisees felt when they heard these words. Jesus was a threat to them and the status quo. No one likes having his or her world overturned.

When you read chapter fifty-three of the Book of Isaiah, you can easily see that Jesus came to fulfill that prophecy. Everything that happens to Jesus was foretold almost 700 years earlier by Isaiah. He came to be our atonement sacrifice for all of our sins.

In chapter three of his Gospel, John simply yet eloquently writes, “For this is how God loved the world: He gave his one and only Son, so that everyone who believes in him will not perish but have eternal life. God sent his Son into the world not to judge the world, but to save the world through him.”

In just a few sentences, John summed up not only God’s love for us but also His plan for our salvation through His son, Christ Jesus. As a Christian, you cannot help but be moved by these words and feel God’s love all around you daily.

As you continue to go through the Holy Week, remember that Jesus came to fulfill the prophecies and show to the world that the depth of God’s love is truly something that cannot be fathomed. As you remember and live these words, shout to the world your testimony of how Jesus changed your status quo for the better. When you do that and profess your love and obedience, you can truly stand firm in His grace.

Psalm 33:1-3 Holman Christian Standard Bible Rejoice in the Lord, you righteous ones; praise from the upright is beautiful. Praise the Lord ...