"In the same region there were some shepherds staying out in the fields and keeping watch over their flock by night.  And an angel of the Lord suddenly stood before them, and the glory of the Lord shone around them; and they were terribly frightened.  But the angel said to them, “Do not be afraid; for behold, I bring you good news of great joy which will be for all the people;  for today in the city of David there has been born for you a Savior, who is Christ the Lord. This will be a sign for you: you will find a baby wrapped in cloths and lying in a manger.” And suddenly there appeared with the angel a multitude of the heavenly host praising God and saying, 'Glory to God in the highest, and on earth peace among men with whom He is pleased.'"  Luke 2:8-14 (NASB) 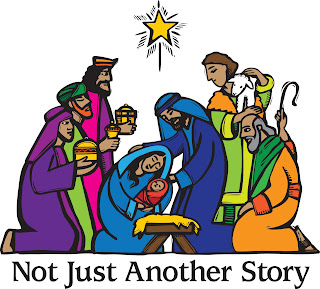 Do you have a manger scene set up in your home for Christmas?  Many of us do, I'm sure.  Almost all of them contain the same pieces.  Mary, Joseph, the Baby in the manger, three wise men with gifts, several animals, and an angel and a shepherd.  These are the classic parts in Christmas plays and pictures.  However, the wise men were not there.  They didn't make it to Jesus until He was at least a year old.  And, does it surprise you to know that there is no mention of an angel there either?  At least not visibly.  Surely the Lord's armies were encamped around His Son.  Where then does the angel come into the story?
Shepherds were in the fields guarding their flocks.  These men were doing a lowly job.  They were smelly and not the favorite people to invite to the Christmas party.  Yet, God chose them for the angels' visit.  He chose them for the announcement that the prophecy had been fulfilled and the Christ child had been born.  And in what a mighty way!  There they were, under that night sky, probably tired from a long day's work, talking among themselves.  Suddenly they see a sight they couldn't believe!  An angel of God had come to deliver the good news.  After that we are told that a multitude of the heavenly host appeared to them and began praising God.
So, why them?  Of all the people the angels could have made their announcement to, why dirty sheep tenders?  What can we learn from this?  The Father wanted to show that the Savior had come for all.  Not just the rich or the religious.  By appearing to the shepherds, the angels not only announced the birth of the King, but also God's inclusion and acceptance of people from all walks of life.
There is one thing that amazes me each time I see a manger scene.  That is that there is almost always only one shepherd present.  However, scripture says "they" went to see what the angels proclaimed was true.  So, a more accurate representation of that night would be Mary, Joseph, the Baby and several dirty, smelly shepherds.  Does that change how you feel about that scene?  I don't know about anyone else, but it makes it more beautiful to me.  God bless you!
at 12:00 PM

Amos 5:24   New King James Version (NKJV) 24  But let justice run down like water, And righteousness like a mighty stream.