Mid-Week Message - Who Are We?

"What marvelous love the Father has extended to us! Just look at it—we’re called children of God! That’s who we really are. But that’s also why the world doesn’t recognize us or take us seriously, because it has no idea who he is or what he’s up to.  But friends, that’s exactly who we are: children of God. And that’s only the beginning. Who knows how we’ll end up! What we know is that when Christ is openly revealed, we’ll see him—and in seeing him, become like him. All of us who look forward to his Coming stay ready, with the glistening purity of Jesus’ life as a model for our own."  1 John 3:1-2 (MSG) 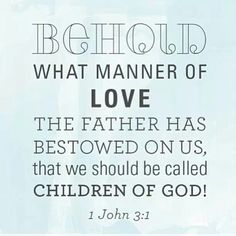 Who am I?  That is a question we all ask ourselves at one point or another during our lifetime.  As for me, I spent much of my life believing that I was who the world said I was.  I was the daughter of my parents, a sister to my siblings, an overweight child that was always nice to everyone.  I liked dolls and playing with my friends.  I was just one of the kids.  That's who I was, I thought, when I was a child.
As a teenager I was a good student.  I did well in class and became the person that others came to if they needed to copy notes or get the answer to a homework question.  I didn't cause problems for any of my teachers and was generally obedient.  In the hallways, I was the person that was teased and mocked because, I thought then, that is just who I was.  I guess I thought I deserved it.  My shelter was my youth group at church where I was accepted as long as I kept my place in the hierarchy of personal relationships.
Young adulthood brought more assurance that who I was had to do with my performance in college classes and jobs.  As long as I did what was expected, I was praised.  My identity became tied in with how well I carried out my duties.  It was sometime within this time frame that the Lord began working on changing my viewpoint of who I was, and more importantly, whose I was.
The world will define us as long as we allow it to.  Part of being in the world but not of the world is breaking the thought cycle that carries that characterization.  We are so much more than any earthly definition!  When we study the scriptures we find out that we were created with purpose by Almighty God who is without beginning or end.  He is the perfect Creator and chose to give life to each of us for His glory.  Imagine that for a moment - you and I are here because He desired us.  Before we were born, He already loved us and saw us as a part of Himself.  We carry His very breath inside of us.
Brothers and sisters, that is who we are.  We are His children.  Sons and daughters of the great I AM!  He molded and made us and gave us life because He wanted us.  Can you grasp that?  We are not here to satisfy the world and its ideas of who it thinks we should be.  We are beings created to be with the Eternal Father forever.  Our time here is to be a beckoning to those that have yet to find Jesus.  In us they should see a holy difference that will draw them to the cross.  We are His children and we are His ambassadors.  How much more could we ever hope to be?
I know we are all struggling with something.  However, this struggle, in view of eternity, is momentary.  We were made for so much more.  Let's fix our eyes on Him and ask Him to reveal to us His true self.  When we see Him as He is then we will be able to better understand who we are.  As we learn more of His Word and our relationship with Him grows stronger, the more confidence we will have in the royal and holy identity we were meant to have.  May you be blessed this week by His nearness.
at 12:00 PM

Romans 2:5-11 English Standard Version 5 But because of your hard and impenitent heart you are storing up wrath for yourself on the day of w...